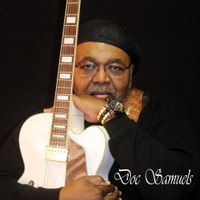 Who Is Keith "Doc" Samuels? Keith "Doc" Samuels was born in Chicago, Il on March 16, 1950 and started singing at the age of 14. ​Raised in Cabrini-Green Projects on the Northside of Chicago, Keith "Doc" Samuels attended Cooley Vocational High School and that’s where he ran into 3 young teens, Lamont Maxwell, Tyrone Luster, and Johnny Holmes. They formed a group called "The Ambitions". "The Ambitions" took 2nd place to the "Jackson 5" at a talent show that was held at the Regal Theater. At that time, Keith was influenced by artists like Curtis Mayfield and "The 5 Stairsteps". his passion for music grew and he learned to play guitar and the bass. Keith enjoyed listening to Guitarist like Johnny Smith, George Benson, Walter Becker, and Joyce Cooling. Later, Keith was introduced to a man named Floyd Smith Floyd introduced him to a small record company called Fipi Records. They were right next door to Brunswick Records which is where he got a chance to do background and played on a few tracks for artist like Donny Hathaway, Little Milton, Tyrone Davis, and Gene Chandler. Floyd Smith took Keith to Kalamazoo Michigan and placed him with a group called Ripple. Ripple was signed with GRC Records which was owned by Mike Thevis in Atlanta, Ga. ​In 1973 he wrote a hit record called "SURE IS FUNKY". ​Seven years later "Kid N Play" recorded the hook line to the song and put it in their hit movie called "House Party". Ripple went on to become an opening act for groups like Earth, Wind & Fire, Commodores, Kool and "The Gang, Tower of Power, Gladys Knight and The Pips, Donny Hathaway, Al Green, The Ojays and Gram Central Station. In 2019, Keith "Doc" Samuels joined forces again with one of the members of Ripple, Curtis "Kazoo" Reynolds and began developing a new and improve group "RIPPLE 2.20" was formed with their latest single soon to be released entitled "EXERCISE MY LOVE". Keith "Doc" Samuels is now collaborating with Ms. LTanya of Simply Awesome Entertainment of Fayetteville, GA to bring Simply Awesome Entertainment to you. For More Info: 770.837.7067 Email: SimplyAwesomeEntertainment@gmail.com