Sunday, August 21 at 3:00 p.m. on Jazz Tones on Jazz 91.9 WCLK  I will pay a special tribute to Bobby Hutcherson and his career.  Hutcherson, a Los Angeles native and accomplished vibraphonist, made his transition on August 15.   His career spanned over 50 years and 40 recordings.  Slipping free of the constraints of the  designs of Bebop, Hutcherson adapted his instrument to a freer post-bop language. Bobby played chords with a pair of mallets in each hand. He also had a close relationship with Blue Note Records evidenced by the fact he was featured on classics like Out To Lunch (1964) with Flutist and Bass Clarinetist, Eric Dolphy.  Another example is Mode for Joe (1966) by Joe Henderson.   Hutcherson was one of the young young artists who redefined Blue Note's forays into experimentalism.  Stephen Harris stated "he was by far the most harmonically advanced person to ever play the vibraphone." Bobby Hutcherson quoted his old friend Eric Dolphy as saying " music is like the wind--you don't know where it came from, and you don't know where it went. All you can do is get inside the sphere of it and be swept away." Bobby Hutcherson's last release for Blue Note was 2014's Enjoy the View, which featured Joe DeFrancesco and David Sanborn. Tune in Sunday afternoon, August 21 for my remembrance of the music of Bobby Hutcherson. 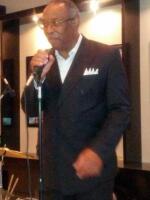