Trumpeter Leslie Drayton has the perfect sound for the WCLK playlist. A founding member of Earth Wind and Fire, Drayton has been working on music production throughout his career. He's a gifted musician who begin music lessons at five, following in the footsteps of his father. He worked as musical director and conductor for Marvin Gaye before forming The Leslie Drayton Orchestra, which released four albums on his Esoteric Records label before establishing the Leslie Drayton and Fun band.

Drayton's current release is Changing Landscapes, featuring funky, energizing tunes that will hold your attention and keep you wanting more as the songs continue to spin around in your head. 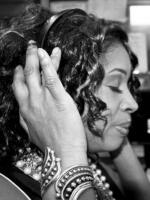